Neural networks have seen amazing diversification in its applications in the last 10 years. The effectiveness of deep learning as complex function approximators has allowed us to go past many benchmarks across domains. Models using some form of deep learning have been widely adopted for the real-world tasks, which has brought to the fore, a very important topic of model confidence. More often than not, the predictions from the deep network are used for some downstream decision-making. A semantic segmentation map produced by a CNN is used to plan future trajectories of the driverless cars. The credit scores from a model are used towards loan approval/denial decisions. Thus it makes sense to have reasonable estimates of uncertainty of our model’s predictions. It is interesting to note that many papers from more than a couple of decades ago tried to solve this problem for neural networks through its Bayesian treatment. The first ideas behind Bayesian Neural Networks (BNNs) can be found as early as 1992-1995 in various works by David Mackay [1], Radford Neal [2] and Hinton and Van Camp[3]. A great keynote talk about the history of these ideas was given by Zoubin Ghaharmani in the NIPS 2016 workshop. More recently, Yarin Gal came up with a Bayesian interpretation of dropout based deep models which has resulted in a flurry of research into this area (not to mention funny comments like this post from Ferenc and the comical cartoon below!) In this post, I would like to summarize few interesting papers in the uncertainty estimation area in the recent literature. 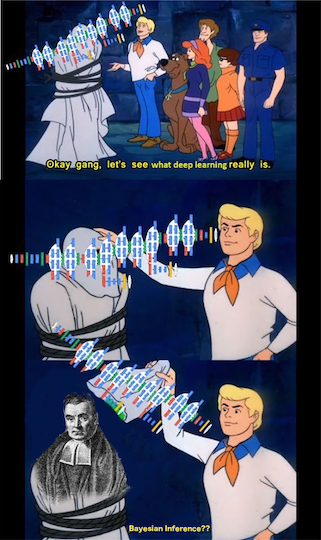 Before jumping into the specific papers, it’s always nice to have some mental buckets into which all approaches can be categorized. In my limited knowledge, most works in uncertainty estimation in neural networks fall under two heads. The first belongs to the category of treating the network as a Bayesian model, having a prior distribution over its weights and using data to learn a posterior distribution. The problem of doing inference in such setups has been solved through either Markov Chain Monte Carlo (MCMC) based methods (like the ones by Mackay mentioned earlier) or variational methods (see this great lecture slide). Majority of papers follow this paradigm and these methods are often clubbed together as Bayesian Deep Learning. The second category, for the lack of a better name, is the non-Bayesian one. Many recent papers have explored ideas other than approximate Bayesian NNs, some trying to obtain a frequentist estimate of uncertainty while others try to enforce an explicit minimization of KL divergences of certain distributions of in-domain and out-of-domain samples while yet others use adversarial samples or contrastive samples to build uncertainty estimates. The key ideas from some of these papers is given below. The main intention here is to give a breadth of the kind of techniques being explored.

2. What Uncertainties Do We Need in Bayesian Deep Learning for Computer Vision? by Kendall et al [5]